Written and Narrated by G. Edward Griffin.
This is a video adaptation of a documentary filmstrip which explains the scientific rationale for Laetrile therapy. Based upon book of the same name. DVD.

The Story of Vitamin B17 (Laetrile)

Written and Narrated by G. Edward Griffin. This is a video adaptation of a documentary filmstrip which explains the scientific rationale for Laetrile therapy. It presents evidence that cancer, like scurvy or pellagra, is a deficiency disease. It is not caused by the presence of some mysterious virus or X- factor, but by the lack of an essential food factor which, increasingly, is deleted from the menus of modern man. The native diets of those cultures where cancer is rare is examined and found to be 200 times more rich in this substance than the diet of industrialized society. The missing food factor is called amygdalin or vitamin B17, but in its concentrated and purified form developed specifically for cancer therapy, it is known as Laetrile. A theoretical model for the biological action of Laetrile is presented. Included are dramatic case histories of terminal cancer patients who have recovered using Laetrile therapy. Based upon the book of the same name. 60-min. video. Re-mastered in 2011 to upgrade image quality. If you would like information on the book of the same name, go to World Without Cancer book, or for the audio, go to the audio page. If you came here from the Cancer Cure Foundation site, click here to get back to the Sources of Information page. 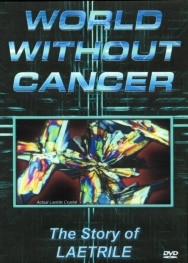