View cart “Audio Archives Volume II” has been added to your cart.

A Discourse on Government. G. Edward Griffin responds to questions from a camera crew creating a documentary on the U.S. Constitution. He answers the most difficult questions imaginable in the fields of political and social science. The depth and clarity is amazing, especially considering he is speaking extemporaneously without script or notes. Includes information relating to Freedom Force. DVD

A Discourse on Government by G. Edward Griffin

“Government is not reason. It is not eloquence. It is force. Like fire, it is a dangerous servant and a fearful master.” – Attributed to George Washington This program consists of unedited responses to questions presented to G. Edward Griffin by a camera crew creating a documentary on the U.S. Constitution. In this session, he answers the most difficult questions imaginable in the fields of political and social science. The depth and clarity of his response is amazing, especially considering he is speaking extemporaneously without benefit of script or notes. In an era when many people are just now waking up to the WHAT of current events, here are issues that go far beyond that shallow pool into the deep water of WHY and HOW. Also included is a bonus feature entitled Winning for America, Mr. Griffin’s commentary on the Ron Paul 2008 campaign and a long-term strategy for victory offered by Freedom Force International. With these programs together, be prepared for a most rewarding journey. Total time: 1 hour 52 minutes. 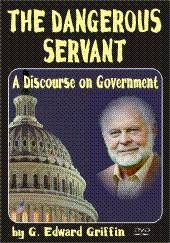