Reality Zone is a global marketplace for documentary books, audios, and videos dealing with freedom, health, and monetary issues, dramatic events of history, ancient-earth mysteries, and true-life adventures. We are the marketing arm of American Media, publishers and producers of documentaries, and we are the commercial outlet for educational materials relating to the mission of Freedom Force International. We distribute materials from other sources as well. We do not necessarily agree with all views expressed in materials from other sources, but we guarantee that nothing is offered which we believe is fundamentally in error or offensive. The Reality Zone and American Media are the creations of G. Edward Griffin. 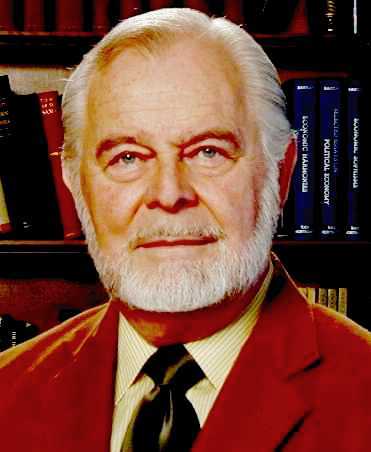 G. EDWARD GRIFFIN is a writer and documentary film producer with many successful titles to his credit. Listed in Who’s Who in America, he is well known because of his talent for researching difficult topics and presenting them in clear terms that all can understand. He has dealt with such diverse subjects as archaeology and ancient Earth history, the Federal Reserve System and international banking, terrorism, internal subversion, the history of taxation, U.S. foreign policy, the science and politics of cancer therapy, the Supreme Court, and the United Nations.

His better-known works include The Creature from Jekyll Island, World without Cancer, The Discovery of Noah’s Ark, Moles in High Places, The Open Gates of Troy, No Place to Hide, The Capitalist Conspiracy, More Deadly than War, The Grand Design, The Great Prison Break, and The Fearful Master.

G. Edward Griffin was born in Detroit, Michigan, on November 7, 1931. While in grade school, he performed as a child actor on every radio-drama series that originated in Detroit, including The Lone Ranger, The Hermit’s Cave, The Ford Theater, and Story Time. As a senior in high school, he was the Master-of-Ceremonies on the CBS series, Make Way for Youth. He was graduated from Redford High School in 1949.

Ed Griffin attended the University of Michigan from 1949 to 1953 where he earned a Bachelor’s Degree in Speech and Communications. During most of that time, he worked as a staff announcer at the University’s radio station WUOM. In 1950, he became a member of the ATΩ fraternity and was Vice President in his senior year.

He married Patricia Ann Irving, a student nurse at the University Hospital, on June 27, 1953, at St. Mary’s Chapel. The wedding reception was held at the ATΩ fraternity house. They took up residence in Ann Arbor. t was shortly after this that Ed became an Assistant Director at WWJ-TV, the NBC affiliate in nearby Detroit.

He was called into military service in 1954 and received basic training at Fort Leonard Wood, Missouri, followed by an assignment at Fort Bliss, Texas, in the ant-aircraft branch of the Army. After training to be an electronic specialist for maintaining radar systems, he was made an instructor. That assignment, however, was short lived. Because of his civilian experience in communications and entertainment, he was moved to the Special Services division at Fort Bliss and, for the balance of his enlistment, served as the coordinator of USO tours and local troop-entertainment programs.

Upon discharge from military service in 1956, Ed, Patricia, and their first-born son James moved to the West Coast to see what fortunes were waiting in Hollywood. As it turned out, there were none. As Ed explains it: “Hollywood is a magnet that attracts talent from around the world. It soon became obvious that people with greater talent than mine were wasting their lives washing cars and bussing dishes while waiting for their big chance. I had a family to support and didn’t want to travel that road. I decided to get a real job.”

In 1958, he went to work for a large insurance company, the Equitable Life Assurance Society of the United States, and became a specialist in group-insurance programs. Rising quickly through the ranks, he was poised for a promising career at executive levels of the company when he became aware of political and social trends that greatly concerned him. By 1961, he was convinced that all his plans for economic security and a rewarding life were to no avail if the underlying system of freedom is destroyed. To the amazement of all, he tendered his resignation at the Equitable and accepted employment as an organizer for an activist organization, The John Birch Society. He served in this capacity for several years and soon was promoted to the rank of Major Coordinator for the Western U.S. region. In 1963 he was designated as an official spokesman for the organization. Mr. Griffin left employment with the Society in 1965 to become an independent publisher and producer of documentary films through his company, American Media. He published The Life and Words of Robert Welch, Founder of The John Birch Society in 1975. (Click here for Mr. Griffin’s comments on the Society’s controversial image.)

In preparation for writing his book on the Federal Reserve System, he enrolled in the College for Financial Planning located in Denver, Colorado. His goal was not to become a professional financial planner but to better understand the real world of investments and money markets. He obtained his CFP designation (Certified Financial Planner) in 1989. The first edition of his book, The Creature from Jekyll Island; A Second Look at the Federal Reserve, was published in 1994. In 2002, Ed founded Freedom Force International, a holographic organization (with highly dispersed leadership) dedicated to the victory of individualism over collectivism. It now has members in over 65 countries.

He has four children: James David, Daniel Allen, Ralph Edward, and Kathleen Marie. He and his wife Patricia reside in Thousand Oaks, California.

G. Edward Griffin is a recipient of the Telly Award for excellence in television production, the creator of the Reality Zone Audio Archives, and President of American Media, a publishing and video production company in Southern California. He has served on the board of directors of The National Health Federation and The International Association of Cancer Victors and Friends and is Founder and President of The Cancer Cure Foundation. He is publisher of Need to Know News, a weekly analysis of world events, and is Founder and President of Freedom Force International.